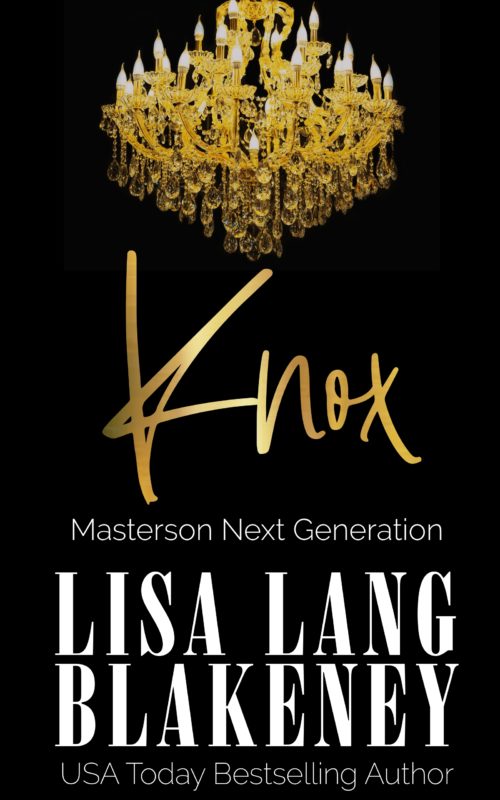 The Bad Boy legacy continues with this next generation of Masterson Men...

All I've ever done is protect her, but she can never be mine…

"Wow! Hot, filled with longing, delightfully sweet through the end. Knox may have been my first Lisa Lang Blakeney book, but it certainly will not be my last. I was blown away by Knox and Gigi’s Love story! I like that they had both how the torch for each other for years… and I absolutely loved the story. Knox is a bit of an alphahole and Gigi is definitely a firebrand! Together, they are utterly delicious. Five stars!"

USA Today Bestselling Author, Lisa Lang Blakeney, returns with a scorching hot spin-off series featuring the next generation of Masterson bad boys and the women who can’t resist them.

All I’ve ever done is protect her, but she can never be mine…

My name is Knox Masterson,
and I’m not a good man.
I fight too much.
Play too hard.
And that life has been fine by me.
But when there’s a threat made against my family, they all want me to protect her.
The girl who’s always been off limits.
The daughter of my father’s best friend.
And the one woman who could send me to my knees, if she only realized the power she possesses.

I want to be the good son, and the fierce heir apparent they can depend on.
But when they ask me to keep Gigi safe, all bets are off.
I ain’t doing that again.
Been there, done that.
Because the two of us might kill each other, or do something even more deadly like fall hard for each other.
Yet once I lay eyes on her again, I change my mind quickly.
I guess old habits die hard.
Because just like when we were kids,
I feel compelled to protect her.
To fight for her.
To own her.
Too bad she’s going to hate every single minute of it… or will she?

KNOX is a scorching hot, enemies-to-lovers, romantic suspense novel, featuring bad boy Knox Masterson and the forbidden childhood friend he falls hard for, Gigi King. It is the first full-length book in a series of interconnected standalone novels featuring the second generation of Masterson men.

Endorsements
"Knox was fantastic! I loved him just as much as Roman."
Preview
View Book Sample
Disclosure of Material Connection: Some of the links in the page above are "affiliate links." This means if you click on the link and purchase the item, I will receive an affiliate commission. I am disclosing this in accordance with the Federal Trade Commission's 16 CFR, Part 255: "Guides Concerning the Use of Endorsements and Testimonials in Advertising."
GET A FREE BESTSELLERDOWNLOAD
+